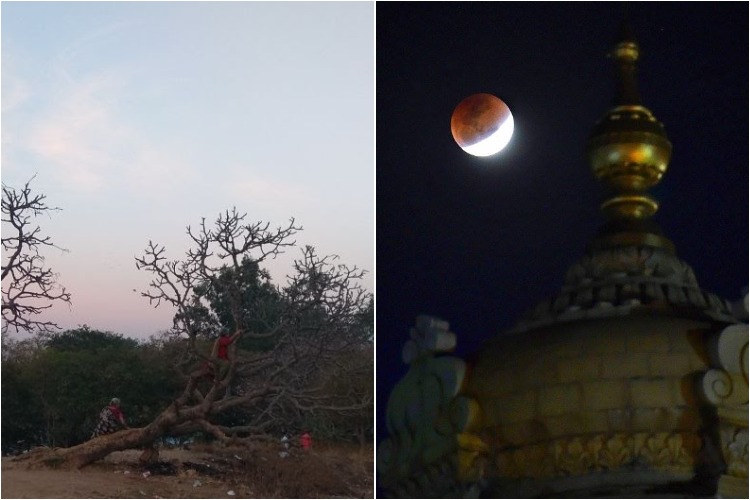 Selfie with the Moon: The Lunar Eclipse Experience at Lalbagh from Bengaluru

On Lalbagh rock, we were surrounded by lots of slippers in neck warmers and ajjis in sweater blouses, and luckily all the hipsters had gone elsewhere.

6:22 pm was the lunar eclipse, they said – so a few friends and I went to Lalbagh Rock. People were eating kadlekai, puffed rice, cucumber (and the pineapple was finished by the time I got there). I shone in the light of the declining sunset that framed the Kempegowda Watchtower and joined the masses of people who had gathered to see the lunar eclipse.

I had left late but was surprised to see absolutely empty streets. The car driver told me he hadn’t had any business all day because of the grahana; people were busy avoiding the moon, staying indoors, bathing and cleaning themselves.

It had been an unexpected day so far. I woke up at 5:40 am and danced with a friend in the morning at sunrise. I was quite happy to have had a good look at the sky in the morning. There is something tingling and satisfying about the quality of the Bangalore sky on the morning and evening of the January solstice.

On Lalbagh rock, we were surrounded by lots of slippers in neck warmers and ajjis in sweater blouses, and luckily all the hipsters had gone elsewhere. At 6.30 p.m., we were all a little restless: we were standing and looking at the sky in an alarmed state of uncertainty. Would that blue moon plus super moon plus lunar eclipse that wouldn’t happen for 150 years actually happen? The chatter had a note of anxiety – the sun has set, the sky is pink, where is that elusive moon that I’m ready to write poetry and photograph with my DSLR and watch with my Decathlon binoculars ? Nowhere. What if Indian astrophysicists got it wrong? In Bangalore, not even the moon can get anywhere on time.

A cheer suddenly arose as we moved. Panicked at the thought of missing something, we looked around frantically: all we were applauding was a cheerful white-haired lady who had climbed the frangipani to get a good lunar eclipse seat in the front row. .

Amateur astrophysicist volunteers were walking around encouraging us to feast while we waited, trying to fit a good scientific temper into the crowd. Bangalore rarely has public gathering days on the best rock in town after sunset, and there was a note of pleasure in just being here, knowing full well that on Double Road, just 750 yards from us, was probably the most heinous kind of madness that has nothing to do with the moon. Everyone was on the alert. If one person pointedly walked to another place on the rock, two or three muffled whispers later, two or three people would follow to see what it was.

We walked 20 meters to the left for corn, then we saw it: a red and dusty moon, perfectly framed on the horizon of dried frangipani trees with the first notes of azaan of the hours to accompany it. Our happy little expectation crowd was reassured that the moon would appear for sure, and excited speculation was whispered through the crowd.

Nothing compares to witnessing an event of this scientific and superstitious proportion in a large crowd. You cannot contain this experience in the privacy of your own depth or silence; it is swayed by all kinds of human chatter, yours included. When the dusty moon marks its moment and finally comes into full view right above that eucalyptus tree that was blocking your view, you know you have permission to sit back and enjoy the spectacle. The crowd of human chatter sets in. Suddenly we are witnessing the pervasive phenomenon of everyone brandishing their smartphones to take pictures of the eclipse, as if it were a ritual.

Suddenly someone among us pulls out a pair of binoculars. The eclipse has not reached its peak, but when we all have the chance to gaze at the distant orb in its copper grandeur, there is a silence. This prelude to the eclipse, really seeing what this body of reflected light is, produces a keener appreciation and curiosity for what is to follow.

The moment is not yet here and there is more space for the passing time. We have discussed eclipses a hundred times: penumbra, shadows, blue moons, and super moons, repeating this helpful pamphlet that astrophysicists have handed out, assuring us that the moon will be even more worth looking at in a few more minutes. We make fun of each other and listen to other conversations. People started using flash photography, desperate to send a WhatsApp photo to their favorite WhatsApp groups, and we took it upon ourselves to go and berate them and tell them to keep the sanctity of the moment. A chaiwallah arrives, and with complete indifference from the working class and busy doing his job, refuses to look at the moon and laughs at our continued fixation on it.

When the binoculars return to my hand like a benevolent seal, our shadow on the moon is more visible and pronounced, and a small ring of light frames the moon with a full 3D effect. We pass the binoculars in wonder. No one has told us that lunar eclipses can be so beautiful. Somehow neither of us had a predetermined picture of a lunar eclipse like we do of the solar eclipse, and one of us exclaims, “No one said how beautiful that would be, yeah, wowwww…. “

Our answers are confusing and like good 21st century tech kids we say a lot of nonsense: 1) “From the binoculars, it looks like a magazine cover image yeah! 2) “Wow, this moon is totally like lit by studio lights, it looks fake !!” 3) “Dude, looks like a space movie!” The moon is compared to a ping-pong ball (the most obvious), a crystal glass ball (duh), an Arun (or Vadilal) vanilla ice cream that came in a white ball (“now j ‘want to eat it “), and even just a light bulb. This has a quality of unreality, not quite suited to poetry or cinema, which must be reduced to understandable parameters. But I like to believe that as the shadow and the brightness, the sun and the moon, the light and the dark began their play, we have been moved into obedient silence within ourselves, if not only for a brief moment.

A team of photographers for an unknown TV station were busy walking through the crowd with heavy LED lights, and a man climbed the hill on his scooter with his headlights flashing. The sacred is a cluttered and cacophonous affair.

The twins pass by and we huddle together with goosebumps in our collective camaraderie with our clichéd exclamations. We go crazy when we realize that we are watching the fast-forwarding waxing moon. Each frame by frame by frame produces the appropriate “oooh” and “aaaah” and “OMG” (Lolz).

Around us, people are trying all kinds of gymnastics, trying to take a selfie of themselves against the lunar eclipse with a smartphone. A boy is apparently just a shadow playing the role of taking a selfie (after his brother takes his phone). A woman with a confident iPhone thinks her camera is so good and announces, “So should we try taking a selfie? We laugh and cackle like teenagers who think we’re too cool for these things. Groups of people pose like people do with postcard sunsets recommended on TripAdvisor: rocking the moon in the palm of the hand and so on. It’s hilarious, but real. This is not the time for contempt or for a sociological study of humanity.

Soon after frame-by-frame has reached its limit, all we have is the super moon (what’s a simple super moon after that lunar eclipse, eh?) To leave, Lalbagh’s guards come to whistle at us on the signal. The mound has emptied and the immense sky above us seems larger. “Wait sir! two three more minutes! we beg. We want to drink our fill, and the keeper respects it in one way or another after asking us, “Nodboda medem, enu aagodilva? Assuring him that his eyes are safe and letting him mumble about devastation and so on, we stare at him. Once it’s over, we howl like a pack of wolves as is our duty (and I’m not lying, you can ask my friends), and we applaud the moon with a standing ovation. Good show!

What a once in a lifetime experience, to have been surrounded by the delicious banality of human beings and to witness the most democratic moment of the sublime. You just have to go to bed with a smile (but after a drink of course).

The opinions expressed are those of the author.